Between the weather and the folks that were along, our second trip on the Middle Fork was quite the variety pack.  While the West was strongly represented, we also had folks from as far away as Washington D.C., Wisconsin and Canada. There were several families, couples, friends, hardshell kayakers (long boats and short), inflatable kayakers and rafters, . We also had a good mix of ages, including a pod of youngsters, ages 16-21, that we affectionately referred to as the “pack of wolves”.

Once our bags were loaded onto the support rafts at Boundary Creek, we did our usual thing of dividing the hardshell kayakers into three groups, each with it’s own guide, so as to give us all plenty of room to move about the river and play.  That first day I had the wolves. This group of young, enthuisastic kayakers were all in play boats of one type or another.  Their motto seemed to be “leave no river feature untouched”. This was demonstrated as they zipped about the river in search of  the slightest hint of  play. Nothing was off limits; boofs, waves, holes, and given the chance, each other. My job that day was to keep the wolves at bay from the other groups and make sure they were “well fed” with play and challenges.

The raft crew once again did a great job negotiating camps for us prior to the put in.  We’re always looking for the right blend of distance, play and, if possible, a hot springs when choosing camps- you’re only allowed one.  On the Middle Fork camps all get assigned before the start of the trip so you know exactly where you’ll be staying each night.

On our third morning I awoke early to roust Chris L. who said he wanted to do a 6:00 a.m. surf session at the wave where we were camped.  Talk is always bold the night before, so I was a bit skeptical about Chris’ commitment.  He took me by surprise when he came out of his tent after the first call and donned his drysuit.  For 40 minutes he had the wave to himself while I sat on the shore taking photos.  The normally clear waters of the Middle Fork were running dark, an indication of a flash of some kind upstream of us that must have occurred during the night. I still don’t know what side stream it was, but based on the short duration of the muddy waters the rest of the trip, it wasn’t very big.  Chris and I returned to camp before anyone other than the crew was up.

While some of us worked in the kitchen prepping our third night’s dinner, everyone else could be found down by the waters edge relaxing and swimming.  At one point someone indicated there was a badger swimming across the river in our direction.  I have never seen a badger in the wild.  This guy obviously had a routine he wasn’t going to let us disrupt.  He swam straight toward the beach where our group was hanging out, clambered out of the water and gave us all a look as if to say “what, haven’t you ever seen a badger before?” Everyone stood there in awe of this bold little fellow at which point he arched his back, let out a hiss which caused the group to part.  He went right through the middle of everyone, up the beach and continued up the steep hill behind camp like he was late for a date the next state over. I think we were all so stunned I’m not sure anyone got a photo.

Our luck with the weather of the first trip didn’t hold. We were experiencing quite the mix of conditions, fortunately when it did rain, it happened at all the right times.  On our third night at Shelf camp,  sometime around 10:00 p.m we were treated to a simultaneous flash of lightning and a clap of thunder, indicating just how close by the lightning had been.  The sound of the thunder echoed off the canyon walls as it rolled downstream while big rain drops began to fall with little warning.  While most of us were safe in our tents, there was an adventurous group (read the youngsters) that had hiked to the hot springs at Loon Creek two miles away.  Some were still in the springs when the rain hit and said it was magical, while others were mid- trail on the return trip and got pretty soaked.

From our camp we had easy rapids  providing us with some nice warm-up before hitting the Tappin series. This included the newly formed rapid at Cove Creek which had once been Tappin II and III.  The line was the same a the week before- down the left, moving center at the bottom. With a mellow stretch in the middle around the area of the Flying B Ranch, the river picked up again at Haystack and moved right along into camp. Our fourth night’s camp saw us at Survey, a beautiful, low bench amongst the trees. To get there we put in our longest day of paddling, so the comfortable camp was a welcomed site.

As with our trip in late June, on the fifth day we got in run on the lower mile of Big Creek by hiking our boats up to the first bridge. It wasn’t for everyone, so the others spent the time exploring waterfall creek and the confluence with Big Creek.  From there we all went down to Veil Falls and hiked up to the alcove where the mist from the falls chased us around the lush, green meadow at it’s base. The view from there looking upstream is spectacular.

With the rapids at Redside and Weber behind us, it was an easy four miles into Parrot Placer, our last night’s camp.  Many of the raft guides had headed to camp early that afternoon. As we paddled into the eddy and climbed out of our kayaks we were treated to costum clad guides with appetisers in hand- now that’s service!  Not wanting folks to feel left out of the fun, the guides had brought plenty of outfits to share.  The last night had a lot of laughter and came with the reminder that what happens on the river, stays on the river.

Thanks all for another great trip and thanks to our all our raft guides this season; Collen W.,Tessa, Zach B. Billy, Hata, Dewi, , Collen B. 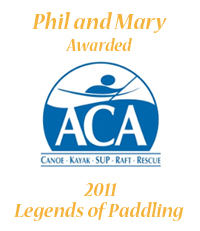